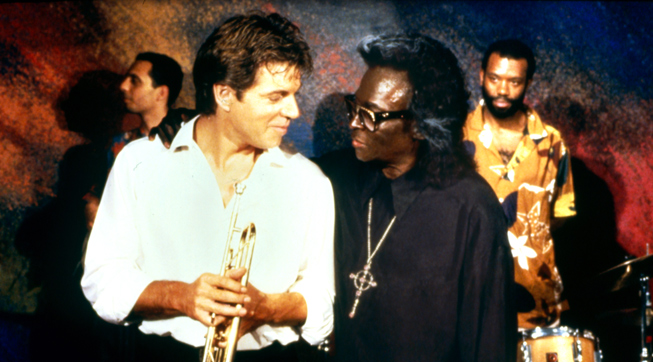 Dingo was a difficult film to make, but surprisingly, considering the participation of Miles Davis, an even more difficult film to distribute. Just as preparations were in full swing in the US for a release, Miles died. Overnight, in the short-term at least, the film would have become a sort of tribute film, and the release was halted. The next opportunity came around the Academy Awards. The music was known in Hollywood to be a shoo-in for a nomination. Preparations were duly made, the film had its qualifying run but the paperwork was incorrectly done and the ballot papers came out without Dingo" on them. Again, the release collapsed. Some time later, a third attempt was made, on a smaller scale, but when the 50 trailers arrived from the lab, six weeks late, they were found to be unplayable. At that point, the distributor gave up.


On the night of January 14, 1969, a jet plane is diverted to the Australian outback town of Poona Flat. The locals, including twelve-year-old John 'Dingo' Anderson (Colin Friels), rush to the airport, curious at this odd event.

On board is the legendary jazz trumpeter Billy Cross (Miles Davis) and his band. Cross, seeing the crowd, decides to play by way of greetings. The band sets up on the runway and the music suddenly explodes, rolling across the desert like a tidal wave. Dingo has never heard anything so beautiful in his life. The band members re-board and the plane drifts away as softly as a dream. Twenty years later...

In the vast sun-scorched outback, Dingo spends his days hunting dingoes and is obsessed by one wily and elusive animal with only three legs. By night, he sits alone at his campfire and dreams of playing trumpet in Paris with Billy Cross.

Dingo, however, is married with kids and his world doesn't stretch far from Poona Flat. But on the eve of yet another birthday he decides that if he doesn't do something about realising his dream he may never have the courage again. He buys a ticket to Paris and arrives ill-prepared.

He starts to track down Billy Cross through the most sophisticated and bizarre city in the world. Cross, now in his sixties, has not played in public for many years and is living the life of an eccentric recluse, surrounded by computerised music facilities and health equipment. When Dingo eventually finds him, he can't recognise the idol of his dreams.

Dingo's naive enthusiasm is infectious. They enter a jazz club and Dingo is allowed to play. Then another trumpet is heard and, for the first time, Dingo fully recognises the Cross that has inspired his life.